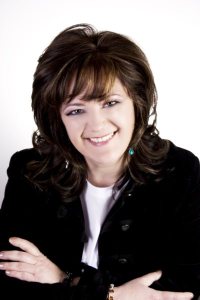 Nicki French was born in Carlisle but mostly grew up in Kent. She cut her teeth extensively as a session singer and cruise ship entertainer, before she got her big solo break in 1995 with her eurodance cover of “Total Eclipse of the Heart”, produced by Mike Stock and Matt Aitken.

Not only a Top 5 silver-certified hit in the UK, the international success of this track was quite remarkable. It spent six months on the Billboard Hit 100 in the United States, peaking at Number 2 – at the time, the highest placing of a British artist in the US since the 1980s. It was also  Number 1 in Japan, Canada, Hong Kong and Brazil, and a sizeable hit in other European countries including Ireland, the Netherlands and Belgium, with worldwide sales topping 5 million copies. 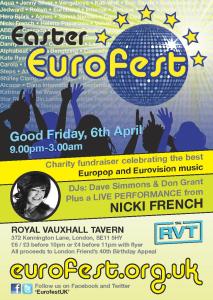 Further hits followed, such as “For All We Know“, “Did You Ever Really Love Me?” and “Is There Anybody Out There?“, although these did not chart inside the UK Top 40.

After two albums and a couple of other hit singles, Nicki qualified for the BBC’s A Song for Europe in 2000, where she secured victory with the song “Don’t Play That Song Again”.

More recently Nicki has performed at Stockholm Pride (twice), EuroPride, Maspalmoas Pride and Sydney Mardi Gras, as well as winning a 2003 Eurovision special edition of the BBC’s The Weakest Link! She has also performed in musicals and pantomimes as well as continuing to record new music.

Nicki has remained a strong supporter of the Eurovision Song Contest, and her first response to the Eurofest team emphasised how much she enjoys performing at events like ours! She has performed at many Eurovision fan events over recent years including hosting the annual London Eurovision Preview Party and performing on the Euro-Cruise organised by OGAE Finland.